In the midst of the economic downturn, Jessie Rodriguez (Cal Poly-Pomona) sold 2,500 homes in the last five years. He’s been recognized nationally for his tremendous career success, but not before losing everything to get there. 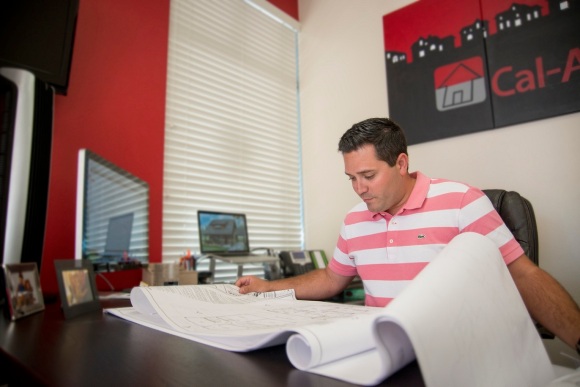 At just 30-years-old, Jessie Rodriguez (Cal Poly-Pomona) owns Cal American Homes, www.calamericanhomes.com, a real estate investment firm in Southern California. Last year, Jessie was recognized among the 2012 “30 Under 30” by the National Association of Realtors®. At the same time, Cal American Homes ranked #286 on the 2012 Inc. 500, which is Inc. Magazine’s list of the 500 fastest-growing private companies in the U.S.

Jessie got his start in college while still a member of Kappa Gamma Chapter. Two alumni brothers spoke at a chapter dinner; they were looking for Spanish-speaking assistants for their mortgage business. Jessie fit the bill and started work the following day. For the next year he worked as an assistant mortgage broker, eventually earning his license and becoming a loan officer.

After partnering with his employers to purchase a Re/Max real estate firm, Jessie quickly realized he preferred the mortgage side of the business. In late 2005, he started his own mortgage company; but when the housing market crashed, he lost everything. By December 2007, he’d shut down his company.

At the time, Jessie and his wife had been married just five months. They had to short-sell their home and move in with her parents. With a college degree and on-the-job experience, Jessie probably could have found a management position with another company. But his entrepreneurial spirit won out; he decided to fight through the fear and start over in real estate.

“You feel so beat down when you go under and lose it all. The hardest thing was having the confidence to go at it again, to take the chance and not give up. It was a humbling experience; but I knew I had to try,” says Jessie.

In 2008, especially in California, the inventory of available homes was mostly bank foreclosures. Fortunately for Jessie, his experience on the finance side of the real estate transaction put him steps ahead of realtors who were accustomed to dealing with consumers rather than corporations and banks.

Jessie formulated a plan and began cold-calling and visiting banks like Wells Fargo and Bank of America. He spent his time stopping by offices, bringing goody bags and presenting his disposition plan for their foreclosed properties. His persistence paid off. By the end of the year he’d sold 30 homes. In 2009, he was up to 150. Last year he closed 415.

But it was more than just being in the right place at the right time. Jessie approached this new role with a plan that addressed the needs of the market and played to his strengths. “I had a good presentation and a proper disposition plan. It wasn’t going to be easy to get the meeting; but I knew if I did, I could close them on my services,” he says.

That plan worked. In the last five years, Jessie has sold 2,500 homes.

Along the way, he’s reinvented himself and the company to stay on top of current trends, especially when foreclosures started to dry up. His success garnered the attention of large corporations who hired him to assist with their real estate assets. That led to managing real estate investments for Wall Street hedge funds. Today, he manages an acquisition team and runs construction crews in order to quickly buy, renovate and put houses back on the market for sale or rent. In every case, he meticulously provides comprehensive reports demonstrating that he’s investing his clients’ money wisely.

Today, 60-percent of Jessie’s business is buying homes for hedge funds. The rest are homes he purchases for his own company to fix up and resell — up to 40 per year. The next evolution has already begun; he’s purchased nine acres of land on which to build 28 new homes.

After all he’s been through, no one is more surprised about Jessie’s success than he is. “Five years ago I never would’ve thought I’d be where I am today,” he says.

Looking back, he says his biggest mistake was not keeping an eye toward the future. “I was 24-years-old when the market was just rocking. I was larger than life, but I was not actually saving. I had no plan in place for the company if everything went sideways. Now, I have very large reserves, and I’m forecasting 12 months out,” he says.

“You have to have a very clear mission statement — like Sigma Nu’s Love, Honor and Truth — and pass that message on so it continues to compound over time.”

The ability to adapt and change has been vital to his recent success. “My head is constantly on a swivel looking at what’s going on with the market, why it’s changing, and asking ‘how do I change with it’ so I don’t go under again.”

Even with the ever-present desire to keep his business in the black, Jessie places a high priority on family. He’s home every day by 6:00 p.m. so he can spend time with his wife and two-year-old son. “It’s easy in this profession to become a workaholic, but it’s not worth losing my family,” he says.

Jessie relates the experience of growing a successful company to building a strong Sigma Nu chapter. He believes both stem from recruiting or hiring the right people and keeping them pointed toward the same mission and vision. “You have to have a very clear mission statement — like Sigma Nu’s Love, Honor and Truth — and pass that message on so it continues to compound over time. It takes more than one person to help a company — or chapter — grow.”

Jessie says he owes his career to having joined the Fraternity. “As recruitment chairman, Sigma Nu was the first business I was a part of. I do what I do today because of Sigma Nu and those two guys who brought me into their company,” he says. He continues to carry on the tradition; currently, Jessie has two Sigma Nu employees; and he’s employed more than half a dozen fraternity brothers over the years.

Although Jessie believes he was born an entrepreneur, he suggests anyone with a dream should jump at the opportunity to achieve it, especially recent graduates. “I’m only 30, but today’s Sigma Nus just coming out of college have so much opportunity. Technology compounds the way they can do business. If you know how to market yourself online you can take your business to another level,” he says.

Jessie met his wife Tina at a Sigma Nu event in the first quarter of his freshman year. Today, they live in Southern California—in their own home—with their son Carter.