By the time footage of a horrific tornado reached the airwaves Brothers from three different chapters in Oklahoma were already leading the rebuilding effort in their communities. 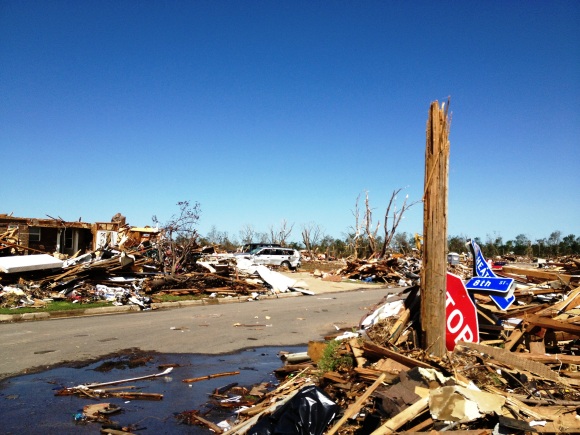 In the aftermath of the tornado that hit Moore, Okla., the city was a shell of its former self. Areas that the tornado rumbled through were flattened. The town was unrecognizable. There were no landmarks with which to judge one’s bearings in Moore. There were no trees either.

“It was horrific,” said Sam Denyer, 21. “It was a war zone. Worse than a war zone, actually. I can’t explain how badly destroyed and mangled it was.”

After several weeks, the national media will have wrapped up its coverage of the disaster. Anytime a national tragedy or environmental crisis occurs, the media is all over it; current events are new and interesting, even sexy. But they die down, and what’s left at places like Moore, Okla., are people who genuinely care, for whatever reason or motive, about the wellbeing of the city and of the people who occupy it. People like Dylan Droege, who made the trip from his hometown of Longview, Texas, to Moore two times. There and back, it’s a twelve-hour trip.

“We immediately sent $2,000 to a Catholic charity up in Moore that went directly to the victims,” Droege said. “I’ve been there twice. We’ve been helping repainting and rebuilding fences. It was just crazy to see something do that much damage in such a short amount of time.”

Droege, only nineteen years old and a sophomore, is already the Lieutenant Commander of the Delta Epsilon Colony at University of Oklahoma. A native Texan and pre-dentistry major at OU, Droege has, come to love his adopted state during the rebuilding process.

“Personally, it makes me have more pride,” he said. “It didn’t matter that I didn’t grow up there. I absolutely love everything about Oklahoma.”

Chapters in Oklahoma (Delta Epsilon, Epsilon Epsilon, and Mu Tau) reported receiving donations from various chapter and alumni across the nation, including schools in California, Georgia and Illinois. Pictured here are members of Epsilon Epsilon Chapter at Oklahoma State.

Zach Cissell is a twenty-two year old senior at the University of Central Oklahoma. He is studying industrial safety and is a member of the Mu Tau chapter of Sigma Nu. He is also from Moore, Okla., the town that was decimated this past May by a tornado that stretched over a mile wide. Cissell, who was at school at the time of the tornado, raced home to his parents and grandparents’ houses, where, unbeknown to him, one of them had already been destroyed.

“I headed down there when the storm was still hitting,” Cissell said. “It took me about an hour to hike in. Once I got there I went in to my grandparents’ house and tried to salvage anything I could. My grandparents had a pretty big house, and we tore it down last week.”

Cissell’s grandparents were not in the house at the time the tornado ran through. Cissell called his mother, who was home, and was relieved to learn the tornado missed her by about a mile. His father, who had been at work, and his brother, at graduation practice, were alright, too.

“When it first hit, it was an absolute wasteland,” Coldren said. “It was definitely shell shock. I remember specifically a house that was demolished beyond recognition. When we went to clean it up, I realized that I was standing in what used to be someone’s kitchen, made into rubble.”

Coldren is a sophomore at Central Oklahoma. Last month he and several fraternity brothers went to Moore and actually knocked an entire condemned house down. Coldren says that his chapter has already completed over two hundred hours of community service, and estimates that they’ll be over five hundred at the end of summer.

“It’s been a marathon,” he said. “It’s going to take five years to put the neighborhood back together. We really appreciate everything that you guys do for us.”

Coldren is referencing the donations Mu Tau has received in the past several months. “A lot of man hours have been donated along with everything else we’ve received for the Save Moore Foundation.” Coldren said that Mu Tau has received donations from various fraternities and chapters across the nation, most recently from schools in California, Georgia and Illinois.

Coldren said that five to fifteen people from Mu Tau Chapter would go to Moore at a time to help out. In the wake of the tornado, they sent multiple teams of brothers every week to the town.

“For some of us being from that neighborhood, to see where they spent their childhood leveled and mashed,” he said. “It’s definitely done a huge part in bringing us together.”

The Epsilon Epsilon Chapter at Oklahoma State University has also taken part in the rebuilding of Moore. Chase Snodgrass, Epsilon Epsilon Commander, said that he and his chapter are in it for the long haul.

“Our chapter is committed to helping our fellow Oklahomans,” he said. “The rebuilding process will take years and we plan on being a part of it.”

Snodgrass is a senior at Oklahoma State. He’s majoring in marketing with a minor in human resource management, and plans on attending law school in the fall of 2014. Snodgrass said that, in the immediate aftermath of the tornado, the responses his chapter got were overwhelming.

“We received phone calls and emails for over a month, from brothers, both collegiate and alumni, wanting to know how they could help,” he said. “With their help we had car loads of needed supplies that have been used and since donated to Serve Moore. Members of our chapter and their families have continuously been helping victims in Moore. In addition, our chapter had over twenty brothers and a handful of prospective members attend a full day of service in Moore and had the opportunity to help out many different people.”

The aforementioned Denyer is also a member of Epsilon Epsilon Chapter. Denyer is a senior and Lieutenant Commander of his chapter. He emphasized how proud he is of his chapter and its efforts to help the people of Moore who were thrilled when Denyer and his brothers came to help.

“When we went to clean it up, I realized that I was standing in what used to be someone’s kitchen, made into rubble.”

“I was really surprised,” he said. “But I think once we arrived, the trauma of the situation had blown over. Everyone was excited and grateful that we were there to help.”

One of the first people that Snodgrass and his brothers helped out was a widow and her infant. “The very first person we had the opportunity to help on the ground in Moore was a younger woman with a one-year old baby boy. Her husband, a former track star at Moore High School, had passed away just before the birth of their child. The woman had hung all of his track medals on the ceiling above the baby’s crib. The tornado had completely destroyed her house. As we tore the house apart, moving it piece by piece to the curb, she had only one request: to look for the medals as we moved the rubble. Amazingly, we not only tore the house down to its slab and moved it to piles along the curb, but we were able to find many of the medals, giving the woman and her child something to remember her husband by.”

Snodgrass estimates that Epsilon Epsilon has contributed over two hundred hours of community service towards the relief efforts in Moore. Still, the cleanup process has just begun.

“While much of the debris has been cleaned up along major highways, there is still much to be done,” Snodgrass said. “However, Oklahoma is not new to tragedy on this scale. Oklahomans always take care of their own.”

Cissell takes it a step further, comparing the destruction in his hometown to a war zone. “It’s still pretty level,” he said. “It’s kind of like a war zone still. You can definitely tell what was and what wasn’t affected by the tornado. It’s definitely getting better, but slowly.” Cissell remembers the moment he heard of the tornado. “I’d just gotten off work. My roommate had the TV on, and I saw Moore being shown on the station, debris clouds hitting the city. I called my mom and made sure she was okay. Then I told myself, ‘I’ve got to get down there.’”

Among the uncertainty he faced on his way to Moore in that moment, Cissel said the support from his Sigma Nu brothers was consistent. “I instantly saw it, because all of my fraternity brothers knew that I was from Moore,” he said. “I kept getting texts and calls from them, asking me to let them know if there was anything they could do for me. Because it is my hometown, seeing the destruction that took place where I grew up puts you in shock. Seeing the outpouring help from the chapter, it puts everything in perspective. It’s really what I saw come out, everything we’ve been taught about brotherhood.”

Droege, Coldren, Denyer and Snodgrass spoke of similar circumstances. Their brotherhoods were strengthened through their shared experiences helping the victims in Moore.

“Personally, it’s definitely an experience you can never have unless you’re there,” Coldren said. “Seeing all the affected people, and to see how proud Oklahomans are, it’s crazy. It’s unexplainable how proud you are to be a part of such a great State that helps each other out.”

“There is no greater feeling than helping those in need,” Snodgrass said. “At Epsilon Epsilon we strive to live our values and the tenants of Love, Honor and Truth.”

In Oklahoma, amidst the wreckage, heartthrob and despair, the tenants that every Sigma Nu decrees by were on full display.

One thought on “Rebuilding Moore”