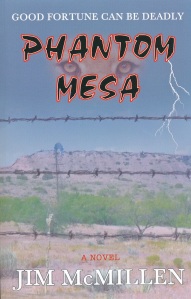 He is confronted by environmental and other issue-driven protesters, electricity-sensitive neighbors, and a pot-smoking, ex-college professor who manufacturers meth in his remote cabin. Augusto Klemen, a Mexican drug lord, formerly a freshman cadet at Clovis’ military boarding school, discovers Clovis’ location through wind farm news. Severely burned by Clovis over 50 years before in a hazing incident, Klemen seeks revenge. Making matters worse, a coldblooded Russian hit man is contracted to kill Clovis.

Atop Phantom Mesa are ancient Comanche burial grounds, once called La Mesa Fantasma by Spanish explorers who reported ghosts there. Widower Clovis experiences several strange happenings there and visits his wife’s cremated remains at the mesa, talking with her as if she was alive. One visit ends with a cliff-hanging episode of survival, including a confrontation with a straying cougar. 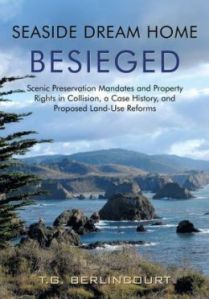 Captivated by the spectacular natural beauty of northern California’s Mendocino coast, the author and his wife, Margie, residents of Virginia, purchase a magnificent eleven-acre promontory high above the Pacific Ocean near the remote village of Elk. On retiring years later, they decide to build their dream home there. Seeking no more than what’s sanctioned by law, they nevertheless encounter fierce opposition from County and State Parks officials, a hostile faction of Elk citizens, and the local media.

In a six-year battle that ignites civil war in the little village, Margie and TG fight back. Well into the conflict they discover the hidden and improper motivation behind much of the opposition. That paves the way for a settlement with the County. But opponents promptly appeal the case to the California Coastal Commission, and there the final showdown takes place.

Seaside Dream Home Besieged makes a clear and compelling case for land-use reforms designed to achieve a more just and harmonious relationship between scenic preservation and property rights. Included are extensive contending quotes from both sides of the conflict, providing insight into the legal and ethical points at issue, as well as into local coastal culture and obstructive human behavior. With its mystery, sleuthing, assorted (non-lethal) casualties, and colorful real-life scoundrels, Seaside Dream Home Besieged provides suspenseful and entertaining reading. Moreover, it’s an indispensable guidebook for those who dare to enter the land-use minefields in pursuit of a building permit.