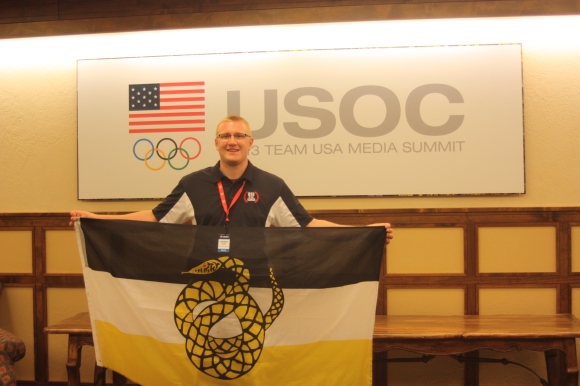 “Just two hours ago I was donating plasma. I was planning to go back to my house and relax but had to run to a suspicious package.”

Drew Bogs (Ball State) is well accustomed to the firefighter-like lifestyle of a news reporter. Just as we were getting ready to talk for this story, he was called to report on a suspicious package in downtown Muncie, where Ball State University his located.

Drew – a college senior – will stand side by side with veteran and celebrity journalists from around the world to cover the 2014 Winter Games in Sochi, Russia, through a Ball State journalism program called BSU at the Games.

“It’s one of the best programs I’ve seen for immersive learning,” Drew says. “BSU at the Games is a freelance news agency of 40 student journalists who will produce stories, photos, video and graphics,” according to the program’s website. 22 students will travel to Sochi while 18 others remain in Muncie.

Drew’s class started back in August. Editors and directors for other student groups in the department hand-picked the students who would participate. “I got the email while I was interning at the CBS affiliate in Fort Wayne.” While in Sochi, Drew will help with filming, video editing and writing.

Drew’s class afforded him the chance to attend the U.S. Olympic Committee Media Summit in Park City, Utah, earlier this fall. The USOC Media Summit is similar to the preseason media days hosted by major professional and college sports leagues that provide reporters a chance to plan stories for use throughout the season.

During the USOC Media Summit in October, Drew was able to interview Olympians, meet with Games organizers, and rub elbows with notable sportswriters, many of whom Drew had admired since jumping into sports media. “On the first night we got to watch a freestyle skiing demo with athletes doing tricks into a pool,” he recalls.

Drew talked with Lolo Jones, the veteran sprinter who joined the U.S. bobsled team for the Winter Games. He also met David Backes of the St. Louis Blues. The highlight for Drew was getting to meet freestyle skier Nick Goepper, the only Olympic athlete from Indiana, and ESPN.com writer Wayne Drews.

“I take everything on without hesitation – I don’t put anything off. I feel like I know what I’m doing and I’m not afraid to ask tough questions – even as a student journalist interviewing world class athletes.”

“We recorded tons of video coverage from talking to the athletes in those breakout sessions you see on TV where a whole bunch of reporters crowd an athlete.” These were followed by panel discussions and roundtable talks where reporters could bounce around from one athlete to the next.

Where most students would have been overwhelmed and intimidated, Drew was in his element. “I got to cover MLB spring training during the summer Grapefruit League. I’m not afraid to ask questions and jump in to help my media team.”

Building confidence and being proactive are critical traits for successful journalists, and Drew has built these habits into his toolkit through the immersive learning experience at Ball State. “I take everything on without hesitation – I don’t put anything off. I feel like I know what I’m doing and I’m not afraid to ask tough questions – even as a student journalist interviewing world class athletes.”

Since the weeks following the Media Summit in Park City, Drew has been busy putting together video packages from the raw footage. “I’ll take a quote from an athlete and coverage of them talking and edit the clips into short, one-minute segments for the website,” he says. “Writers will prepare stories based on the quotes and those stories will get us ready for Sochi.”

As he prepares stories ahead of the opening ceremony, Drew is also starting to think about what he needs to do to mentally prepare for his time in Sochi.

“Adjusting on the fly will be huge,” he says. “When we’re in Sochi, we’ll have a writer with a camera guy at all times. If I get a call saying I have Lindsay Vonn, can you get over here right away for an interview? I’ll need to drop everything I’m doing to make it happen.”

Drew is well aware of the cultural and political issues that will play out during the Winter Games in Russia. “In times of crisis and confusion, this exposure will be good for Russia. When people see other cultures they realize we’re not all the same.”

“My brothers have had such a positive impact on me. They’ve helped me get ready for this trip to Sochi in many ways.”

“Am I worried about Russia’s treatment of journalists? I think I’m a little scared. You hear stories of reporters visiting a foreign land and asking something they weren’t supposed to ask.”

But Drew knows how to harness that concern to his advantage. “Being scared creates adrenaline for me. That feeling is actually good for me – the adrenaline keeps me driven.”

Drew and the other participants of his program will stay on a cruise ship docked near the Olympic Village. Meanwhile, the media staff Drew’s program supports will be staying as far as two hours from Sochi due to limited availability near the host city.

Between preparing for his trip to Sochi and covering suspicious packages in his own college town, Drew has also used his professional communication skills to the betterment of his chapter at Ball State.

Drew credits his Sigma Nu brothers with empowering his career in journalism. “My brothers have had such a positive impact on me. They’ve helped me get ready for this trip to Sochi in many ways,” he says. “Family will always be your toughest critics and push you to be better. My fraternity has served that role for me, alongside my actual family.”

“I’ve learned so many things from Sigma Nu,” Drew continues. “My brothers have kept me so driven and taught me my values. They taught me to never walk away from something just because it gets difficult.”

Drew has seen a marked improvement in the chapter since he joined as a freshman. “The chapter’s steady improvement has served as an example to me that things can always get better. Never let yourself get satisfied with the status quo.”

“We pushed ourselves to achieve every goal, one of which was our recruitment. We were a smaller chapter – about 30-35 men. We’ve been striving to recruit quality and quantity, and train then to be men of honor.”

Follow @bsuatthegames and @DrewBogs_623 on Twitter for real-time updates of his experience covering the Winter Games in Sochi.

[Return to Table of Contents.]