The best innovations are not always a creation of something new. Consider the following examples: the iPhone was not the first touchscreen phone, nor was the iPod the first MP3 player, and the Doritos Locos Taco was certainly not the first taco. However, the innovations that led to these products created a sense of “newness” that was virtually irresistible to consumers. These products created social capital.

The innovation that drove the success of the iPhone was not that it was the first cell phone; rather it was the first cell phone that was totally indispensable. A similar principle can be found with the introduction of the Doritos Locos Taco. The innovation is not that the Doritos Locos Taco is the first taco, but that to be someone, you at least needed to try it. Some people reportedly drove 800 miles just to sample this new taco. The DLT (Doritos Locos Taco) even has its own Huffington Post portal. What has created such popularity among products such as the iPhone and the DLT? The answer lies within the story of the DLT and presents an interesting analogy to fraternities.

In 2009, Taco Bell was looking for a fun and exciting way to celebrate its upcoming 50th anniversary in 2012. CEO Greg Creed gave his staff until March 2012 to create an idea that would catch headlines and garner interest for the company. The idea for the DLT came from an odd source. A loyal customer of Taco Bell began promoting the idea that the company should use Doritos to make taco shells. The creative team recognized the huge potential for this idea, but the question remained: how? Frito Lays had a specific way of making Doritos, including size, thickness, crunch, and its “famous” Doritos dust. The team decided it would first try to sprinkle the Doritos dust on its own taco shells. The team made a quick trip to Home Depot and bought a paint gun to spray Doritos dust onto the corn shells.

A sample group of 200 people finally got the opportunity to taste the DLT, and what did they think? It was terrible! Taco Bell employees were blown away that it tasted so awful. Why? Taco Bell had assumed that the secret to Doritos lay in its dust. But the team had to learn an important lesson: if you are going to do something, do it 100%. Taco Bell was still holding on to its old corn shell taco, but it needed to switch its formula to include every part of a Doritos chip.

How many times has your chapter’s innovation stalled because it tried to put Doritos dust on an old corn shell? For innovation to be successful, the transformation has to be complete: a mere “dusting” of a new idea cannot create lasting change. Taco Bell’s Doritos Locos Taco example illustrates three steps to creating innovation that lasts.

1. Start with a finish date that isn’t too far in the future. This is important as your chapter will have completely new officers in a year. Giving your chapter specific deadlines creates a sense of urgency to get its goal completed. Conversely, the chapter needs an ample amount of time to accomplish its goal. It is tough to plan the “best philanthropy ever” two weeks before the event is to occur. Pick a deadline that will give brothers enough time to work on their project before they graduate or leave office.

2. Many times, trying to take a good idea (Doritos dust) and applying it to your taco shell (chapter) merely gives it a Doritos flavor. For Taco Bell, it took a complete formula change to make the taco shell a Dorito. Several of the company’s shell production plants had to be devoted to DLT shells. In your own chapter, be careful of gimmicky ideas. Members may see some validity in them, but they do not last. The chapter will have to devote many resources to make ideas work. 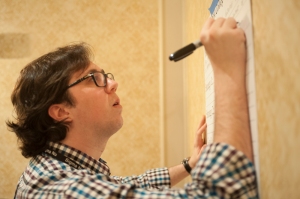 The DLT’s success and popularity is palpable (literally): the company sold over $1 billion worth as of October 2013. Consider using the process that Taco Bell took to create lasting and successful innovation for your chapter. Remember: big ideas take big commitment and time to implement.

Alex Taylor is a 2012 graduate of Huntingdon College. Alex joined the staff team following his graduation and currently works as a leadership consultant. He consults chapters in Virginia, North Carolina, South Carolina, Georgia, and Florida. You can follow his travels on his blog http://travelingamericasarm.blogspot.com/