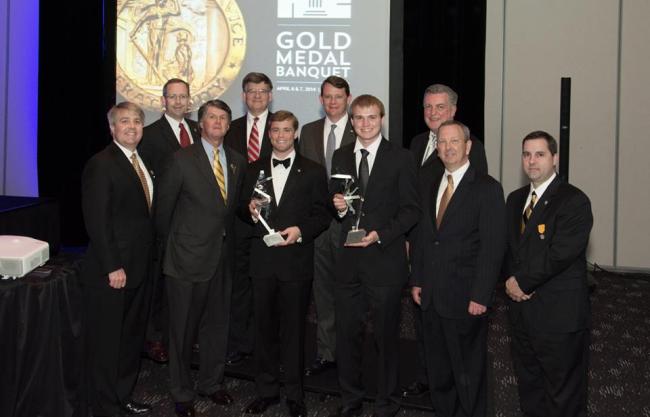 Wells Ellenberg (Georgia) was among only seven collegiate fraternity men to earn the Undergraduate Award of Distinction. Brother Ellenberg, a 2013 graduate of the University of Georgia, is a past Collegiate Grand Councilman and is Sigma Nu’s 2013 Man of the Year. Ellenberg served the Mu Chapter as Commander, LEAD Chairman, and Recruitment Chairman. “I am the man that I am today and the leader that I am today thanks in large part because of my fraternal experience and this award goes out to all those who made that experience possible,” Ellenberg said at the event. 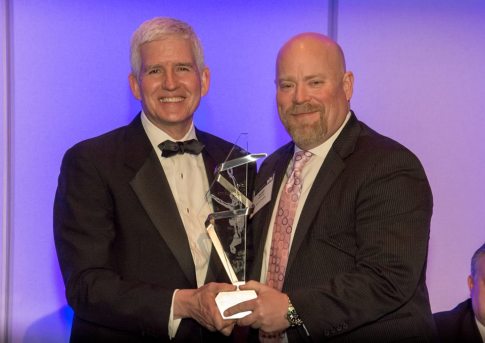 Michael McRee (on right) with immediate Past Chairman of the NIC Allen Groves. Image courtesy of Fraternal Composite Service

“I know that to achieve anything of significance in this industry and others, it’s those partnerships that are important that sustain us throughout all of those difficult times,” said McRee, reflecting on his experience working with fraternities and sororities.

Representing the Epsilon Mu Chapter at the banquet was immediate past Commander and current Collegiate Grand Councilman Joey Thomas. “Our chapter is constantly striving to challenge the status quo and to pursue excellence in all areas,” Thomas says of the chapter. “I’m excited for what the future may hold.”

The North-American Interfraternity Conference was founded in 1909 and is the trade association representing 75 international and national men’s fraternities. The NIC serves to advocate the needs of its member fraternities through enrichment of the fraternity experience, advancement and growth of the fraternity community, and enhancement of the educational mission of the host institutions.