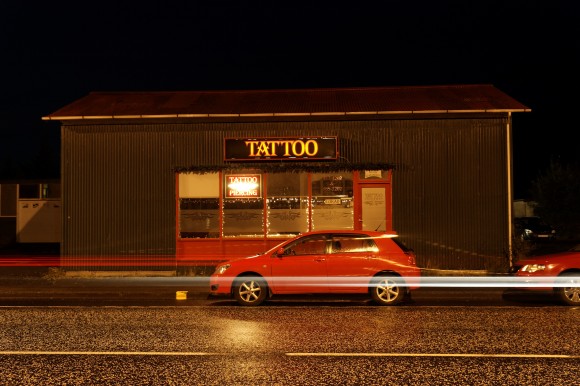 I broke a well-known rule of life: Don’t get a tattoo on spring break in Panama City when you’re 18.

I placed the Fraternity letters on my right shoulder one sunny day with some of my brothers circled around me. It wasn’t planned and definitely not thought out, but in the moment I felt like it meant enough to me to have the letters placed publicly on my body.

Fast-forward a few months. I’m visiting friends in a sleeveless T-shirt (which warrants an entirely different discussion) when one remarks about my “frat tat.”  It was the first of many less-then-enjoyable conversations over the next few years with one central theme:

“Why would you get that on your body… forever?”

It seems that most individuals, even those involved in Greek life, did not feel this permanent choice was wise. As if being a fraternity member was only acceptable as long as I wore my letters in a non-permanent way.

I’m willing to admit this only now with a few years of reflection: I bought into the shaming. I believed the friends and acquaintances who took my choice away from me.

For the majority of the last five years I refused to show my tattoo to people.  I would make up an excuse, or say it wasn’t done, or just downright say no. I was afraid I would be labeled, yet again, as a dumb “frat boy” who made a bad choice one spring break. My arms, and fraternal pride, went into hiding.

I placed the letters on my body because I wanted a reminder to myself, and to those who see it, that I strive to live a life based on a set of values.

I helped facilitate an Undergraduate Interfraternity Institute last summer during which I asked a participant to redefine the term “frat hard.” It was written in his Twitter profile and when I pointed it out he apologized and then deleted it.  I pushed back, telling him not to run from the term, but to tell people what “fraternity-ing hard” actually meant: living by your values, caring for your brothers and the greater community, leading a life of integrity.  A renewed sense of pride rushed over me until I remembered my own refusal to own my fraternal roots. I let those around me take the symbolism of my tattoo and skew it into a generalized, stereotyped version of fraternity.  I didn’t have Greek letters (and in correlation, my values) placed on to this once-in-forever body for others; I placed the letters on my body because I wanted a reminder to myself, and to those who see it, that I strive to live a life based on a set of values.

How dare they see this symbol and think it’s a mistake. Those values are tattooed to my heart, mind, and soul; what’s a shoulder in comparison? Even as I write this article at a crowded coffee shop I get antsy thinking the woman next to me saw the title of my article and upon reading “My Fraternity Tattoo” decided I was just another frat boy. It’s an ongoing struggle.

I strive to live a different life. I refuse to let Greek members who live incongruently with their values ruin an experience that helped thousands become leaders in their communities.

I refuse to let people take an experience that has shaped me into the person I am today and decide that it must be the same as that of all others.

My tattoo stands for refusing to let Greek professionals be harassed because they held a Greek community accountable for the community’s actions or inactions.

I now wear sleeveless shirts – not because it’s hot outside or because I feel like I have muscles to show off (which believe me, I do not) but rather because I invite the discussion.

“Yep, those are Greek Letters. I am a member of a Fraternity”

“Do you have a few minutes, I would love to tell you what a true Greek experience looks like.”

Steven Harowitz is an initiate of the Mu Psi Chapter at Central Florida and the Coordinator of Student Involvement and Leadership at Washington University in St. Louis.

Countdown to Founders’ Month of Service…6

Use your chapter’s operating budget. Chapters that are serious about philanthropy cover their own expenses.  If your chapter raises $1,000 in contributions but uses $600 to cover expenses, the juice probably wasn’t worth the squeeze.  There should be a line item in your chapter’s budget to cover the expenses of your philanthropy event.  This means that every dollar collected goes straight to the cause.  Letting donors know this will encourage them to be more generous.

Countdown to Founders’ Month of Service…7

Setup a PayPal account so donors can contribute online. Now you can send the link via email and Facebook to thousands of potential donors–alumni, friends and family–with the click of a button.

Countdown to Founders’ Month of Service…8

Countdown to Founders’ Month of Service…9

Ask people for donations. Sounds obvious, right?  Then why do so many philanthropy events consist of nothing more than chapter members sitting behind a card table with a change jar?  The most common reasons people don’t donate is because they were never asked or, believe it or not, because they were asked for something insignificant.  Ask donors for a specific amount and don’t insult them by asking for too little.

Potential donors could include alumni, brothers’ family members, other students and local vendors/businesses.  And donations need not only be monetary.  For example, ask a local grocery store to donate bottled water or ask local restaurants to provide gift cards as incentives.

Learn more here about how your chapter can participate in the Helping Hand Initiative.

Pick a charitable purpose your chapter is passionate about. Don’t do a project because it “looks good” or because it gets you positive PR.  Do it because you genuinely care about helping others.  Chapter members are more likely to get excited about an event if it benefits an organization or recipient about which they care deeply.  Check Sigma Nu’s Helping Hand Initiative for suggested organizations to partner with.

Don’t Table this Idea for the Next Meeting

Nice post from Matt Mattson at the Phired Up blog.  Here’s an excerpt:

While wandering around USC’s campus the other day making friends (which was a blast), I happened upon a very creative student organization recruitment tactic.

There were a number of tables set up along the main drag of campus — there were some political groups, the Greenpeace folks were out there, a guy selling tickets to play paintball, a Relay-for-Life group, and a gospel choir selling delicious $1 cookies.  All were doing good work tabling, but there was one other table that really stood out to me.  They had a sign hanging on their table that read, “What’s Your Beef With Christianity?”

Now, religious content aside, I was first intrigued because their sign was a QUESTION, and not a statement.  So, I walked up and asked them about it.  I assumed they were an atheist/agnostic group that was looking for like-minded people with whom they could commiserate, but I was wrong.  At first they wouldn’t really tell me who they were, they just said…

Merely sitting behind a table to “get your name out there” is not an effective recruitment strategy (especially if you’re just surfing fb statuses on your iPhone).  It’s about as effective as littering the campus with recruitment calendars and expecting prospective members to flock to the chapter home.  It just doesn’t happen.

Recruitment means actively finding people who will fulfill the vision of your organization.  And, as this lesson shows, part of the recruitment process is the willingness to engage your critics in genuine conversation.

In chapter rooms across the country, the 2010 calendar is filling up quickly.  Social events, chapter and committee meetings, LEAD sessions, brotherhood outings and campus-sponsored educational events create a busy schedule for the term.  Is your chapter saving room for community service events?

One of the greatest misperceptions surrounding a chapter’s service and philanthropic efforts rests in the chapter’s calendar.  You might look at the month of February, for instance, and note all the philanthropic events hosted by other fraternities and sororities that the chapter is planning on attending.  “We’ve got a full slate of service activities planned,” chapter brothers will reassuringly tell one another.  In this instance, however, does perception really equal reality?

One of the greatest strengths of the college fraternity is in its ability to organize a group of men – committed to the same values and principles in word and deed (see: Ritual) – to carry out a desired task or purpose.  Collectively, your fraternity can make a greater impact than any one person on campus.  And are you really reaching your full potential by simply writing a chapter check to another sorority or pulling together 10 members to take part in another fraternity’s softball tournament?

So now you’re convinced that you need to do more; where to begin?

Start by identifying other groups on campus focused on community service.  Partnering with other student organizations is a tremendous way to share organizational responsibilities and double the service potential.  For instance,  Alpha Phi Omega is a coeducational service fraternity on over 350 campuses:

“Founded on the cardinal principles of leadership, friendship and service (Alpha Phi Omega) provides its members the opportunity to develop leadership skills as they provide service to their campus, to youth and the community, to the nation and to members of the Fraternity.”

A list of Alpha Phi Omega’s chapters – and how to contact the chapter leadership – is found here.

Also consider partnering with Greek Honorary Societies, such as Order of Omega ( chapters) or residence hall groups (who knows when a community service outing might also turn into a recruitment event?)

And of course, the General Fraternity has you covered: consider teaming up with one of our three Helping Hand Partners.